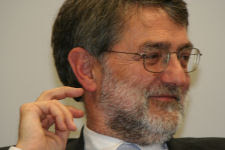 At the meeting Gareth Hughes was nominated as EUROLTA Co-ordinator for the ICC International Language Network.

The conference offered a good opportunity for the exchange of ideas and networking.

New EUROLTA Centres planned.
Universidad La Concordia and the University of West Bohemia, Pilsen have applied to become a new EUROLTA Centres.
Centre accreditation procedures will require an audit, which means a visit to the institution, interviews, course visit, trainee’s portfolios. The next steps will be negotiated and organised by the ICC Head Office and its new Co-ordinator.

First steps for improvements for EUROLTA dissemination have already been taken on board:
1. ICC has provided a new website domain for EUROLTA http://www.eurolta.eu/ which will have to be developed over the next three months. The new website should provide information about each institution/organisation offering EUROLTA with a link to their website and courses offered. The information will include :
- how to become a centre
- practical samples
- testimonials
- EUROLTA event calendar

2. A blog will be provided for the EUROLTA Trainee Community.

3. The EUROLTA Teacher Training Framework will be revised.

4. Promotional Material like brochures and flyers will be developed with space for local adjustments.

hello! i am very interested in your blog. it looks very nice. how did you find this template. there weren't any templates like yours. did you take it from somewhere? if you did, would you tell me how you take it. please

Christel Schneider
Hamburg, Germany
I'm based in Hamburg where I work for the ICC International Language Network (www.icc-languages.eu) as managing director. I have been involved in online learning and teaching over the past twelve years, teaching and developing courses online both synchronous and asynchronous. I have been a regular visitor, presenter and moderator at ONLINE EDUCA BERLIN since 2000, one of the largest eLearning Conferences in the world. I am always keen on learning myself and so I have taken part in a couple of courses with theconsultants-e recently, which I thoroughly enjoyed. I learned how to successfully create WIKIS, I have just finished a course on Blogs and I am presently taking part in a Moodle admin course and a course on Podcasting. I have worked as teacher and teacher trainer in and outside Germany. To find out more about me check www.e-learning-international.com